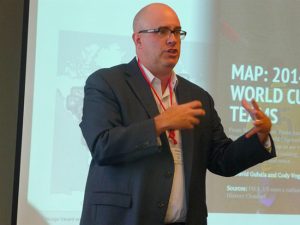 The Journalist’s Toolbox is edited by University of Illinois-Chicago journalism senior lecturer Mike Reilley, who founded the site in 1996.

The site has been updated daily since the start of the pandemic and contains thousands of free (and some fee-based) resources organized by beats and topics within more than 160 searchable pages.

Who we serve and what we do: As newsrooms and resources shrink, the Toolbox plays an important role in providing journalists, students, professors and people in many professions with reliable resources for reporting, editing, verifying and visualizing information for complex stories. The site was originally used by news librarians deep-researching in-depth stories. But as newsroom libraries closed, more reporters and editors began using the Toolbox.

Today, the Toolbox is a free resource for start-up newsrooms, legacy and local media, freelancers, entrepreneurs, educators, student media and people in many other industries. Reporters new to a beat use the pages, organized much like a newsroom, to familiarize themselves with coverage and sourcing. Toolbox content has a Creative Commons license, and educators are encouraged to share Toolbox resources, videos, newsletters, etc. in class and in course materials.

Over the years, the Toolbox has contributed to coverage of many important global stories, including:

History: Reilley launched the Toolbox as a course syllabus resource page while teaching newswriting at Northwestern University in January 1996. The site expanded into a full dot-com by 1998 and was sold to the American Press Institute in 2003. API hosted it until 2007 and it’s been with SPJ since early 2008.

Reilley wrote about some of his favorite tools over the past quarter century in this Quill magazine story about the Toolbox’s 25th anniversary [magazine version]. SPJ webmaster Billy O’Keefe authored a piece on the Toolbox redesign in June 2020. Reilley shared his philosophy behind the Toolbox in this 2012 Q&A with Harvard University and talked about the early days of working on the web during this podcast. The site’s 9/11 resources were added to the Library of Congress’s 9/11 Terrorism Research section in 2004. In 2020, Reilley’s and O’Keefe’s work on the site won an SPJ President’s Award for service to the industry.

Suggest a site: Reilley accepts submissions and suggestions for resources. He also shares links and tools on his @journtoolbox Twitter account. You also can suggest a section or topic to include in the Toolbox, but you must submit at least 10 links to help get the page started.

Flagging broken links: The Toolbox uses DeadLinkChecker.com to remove or repair broken links each month. But if you see a broken link, please let Reilley know.

Posting policy: The links and tools shared on Journalist’s Toolbox are not endorsements. We may recommend a web scraper or graphics tool helpful to a journalist to do a job, but we also share links to stories and content about very sensitive issues. Some of the content may be offensive to many, but are often necessary for journalists to cover a complex story.

The Toolbox does not accept money or trade for posts, nor does it feature paid ads for tools on the site, though it did accept clearly marked banner and tile ads briefly in 2002-03 before API bought the site. Ads do appear on the Toolbox YouTube page and in its twice-monthly newsletter. Reilley retains the right to accept or reject links based solely on their value to journalists.

• Submit a Site for Consideration